Revelations from a TV Slut 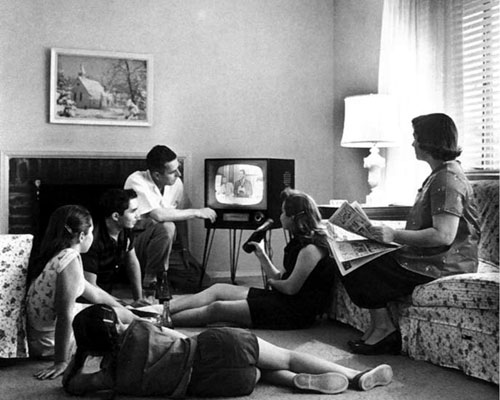 It happened so quickly. There was no forethought; no plan. Before I knew it, I’d fallen into the depths of television depravity, indiscriminately taking in whatever show happened to appear at the end of my clicker. I became a dissolute, slovenly woman: a TV slut. There I sat for three days, watching hour after hour of numbing information float before my eyes.

It all started with my eyes, actually. After minor eye surgery and being ordered to “rest,” with no reading or computer work possible, and no exertion, I couldn’t think of anything else to do. (Never mind audio books or Rosetta Stone.) So I sat and stared at the tube across the room.

I now know how to lasso an alligator, should the occasion ever arise. I know today’s top value on every shopping channel. (I can’t wait to get the gold cream that’s going to make my aging skin young again.) I was devastated when Annie let her viper mother Judith talk her out of her favorite wedding gown on Say Yes to the Dress. I have been informed of every alleged affair of any man or woman who has ever lived in the White House. I have been convinced that aliens live amongst us. I fell in love with Adam on Bonanza all over again. And I cried when Long Island Medium Theresa delivered a message to a young woman from her departed fiance to go on with her life.

There were lots of snacks and popcorn involved. I’m sure if I’d had some bon-bons, whatever they are, I’d have eaten those, too.

Of course, there were also hours of TCM old movies, which I adore, and lots of Fixer Uppers on HGTV. I watched repeats of my favorite shows, like Outlander and Vikings.

I didn’t exactly grow up watching TV. When I was a kid we played outdoors. I thought it was the law or something, but children certainly were not allowed to sit around inside the house. Nor did we want to. There were so many adventures outside! There was the old depot and train tracks across the street, the abandoned house at the end of the road, bike trails through the woods, and Doc Rea’s veterinary barn half a block away. It was always fun to pop in there to see if he had a horse or goat that needed petting. We could walk the two blocks to town where the creek paralleled main street. Springtime was good for wading and letting tadpoles tickle our ankles.

Ah, that is indeed a long-gone era. When I was seven we got our first television set and, as far as I knew, it belonged to my Dad. We kids weren’t allowed to touch it. There weren’t enough seats in the living room anyway, so mom and dad each had their chair, which we did not deign to sit in, and the rest of us sprawled around on the floor, watching what our parents watched. Bonanza. The Loretta Young Show. Gillette Friday Night Fights. Being selective in our watching came without question, which left us lots of time to do other things. The rules relaxed as we got older, but habitual watching didn’t stick with any of us.