The Day I Met Carrie Fisher 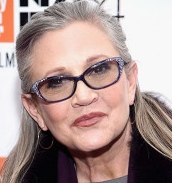 Many years ago I was doing a community building workshop for Toyota at a conference they held for their female employees. There were thousands of women there. One of the keynote speakers was Carrie Fisher. I thought her speech was fantastic. A bit wacky, a lot funny, and very touching, she talked about her life, including how odd it had been to become a Pez dispenser at age 19.

I didn’t expect to meet her close up and personal, but as I was leaving the hotel the next day I stood outside waiting for the taxi the doorman had called for me. Lo and behold, there was Carrie, sitting on a low brick wall, waiting for her limo to arrive. We were the only two people out there. She immediately struck up a conversation, so I sat down beside her to chat.

She asked what I’d been doing there and when she found out I have a degree in counseling, she wanted to know if I thought her family life was odd. She candidly revealed that she’d had a complicated relationship with her mother. Now that she was a mother herself, she appreciated what her mom had gone through to raise her, especially most often as a single mom. Her own mother, the incomparable Debbie Reynolds, had been off making movies a lot when Carrie was young and, being such a huge talent, was a hard act to follow. However, at this point in her life, Carrie appreciated her mom and said she was the best grandmother in the world. She was so grateful they lived next door to each other. When Carrie went off the deep end, which she confessed to doing pretty regularly, her mother was always there to take care of her granddaughter, Carrie’s daughter.

Carrie wanted to know if I thought that was weird. She thought maybe it was, but hadn’t quite figured it out yet. I told her I thought it was perfectly normal to do what’s best for one’s child. She smiled broadly when I said “perfectly normal.”

Her limo came and seeing that we were both going to the airport and that we’d just had such a spontaneously intimate conversation, I felt certain she’d invite me to ride with her. Instead, she got in, waved, and rode off.

Ah, that was Carrie Fisher. Candid. Funny. Real. Alive. Unapologetic. It was a privilege to have met her. I’ve never forgotten our talk, or that beautiful smile.