A Rose is a Rose 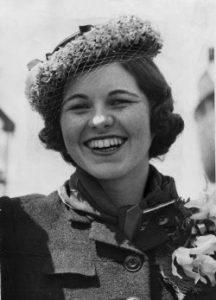 With the two new biographies just out about Rosemary Kennedy, I decided it’s time to share a story about my experience working for her sister, Eunice Kennedy Shriver. Yes, they were sisters in the Kennedy family, thus sisters to JFK, Robert, and Ted. It was 1974 when I volunteered to work at the Special Olympics, which was a new organization with a big event being held on my college campus, Central Michigan University.

Mrs. Shriver (I never dared call her Eunice) had founded the Special Olympics out of love for her sister Rosemary. As those of us who worked the three-day event on the track field all knew, Rosemary was what was then called retarded, today called mentally impaired. What we didn’t know at that time and what I learned in subsequent years was that Rosemary’s disability was due to her father having had her lobotomized. It’s a brutal tale for which you’ll have to read the biographies to get details.

But working with Mrs. Shriver was something else. I was a small-town girl in a small-town college with a small-time job. The first time I laid eyes on Mrs. Shriver it was obvious that the silk dress and pearls she wore were more valuable than everything I owned on earth all put together, including my junker of $75 Volkswagen Beetle car. I thought her regal, beautiful, aristocratic… a combination I’d seldom witnessed in my little world. But one thing was clear: her love of the children who were participating in the games. I barely deigned approach her, but the athletes could go to her dirty and sweaty, and hug the heck out of that silk dress and Mrs. Shriver never flinched. They all received her affection.

I fell in love with her. I thought her the most marvelous woman I’d ever met. Today I see her as one of the most influential and important women of the twentieth century for bringing mental impairment out of the closet – literally in too many cases – and bringing human beings with all types of abilities together in a spirit of hope and fun and love.

As luck would have it, my job was to meet celebrities as they arrived and escort them to Mrs. Shriver. It was such fun meeting people I’d seen in the news, including TV and movie stars, athletes, and even Miss America. Out of everyone I met, however, two stood out for their interactions with the kids. Sally Struthers, who was a huge star due to the hit TV show All in the Family, showed up each morning before the kids came. She was there when they arrived and stayed until she’d given every last one of them a hug in the evening. Then she’d go out dancing ’til the wee hours of the morning. I couldn’t even begin to keep up with her. She was great. And singer Mac Davis sat under a tree all day long and taught the kids how to play music with spoons. They loved that. I think we stole every spoon out of the cafeteria in order to handle all the kids who wanted to play. They would go run their meet, then scurry right back to Mac to play more spoons.

There were some celebrities who came just for the photo ops. Once that camera flash popped they were gone.

On the second day Mrs. Shriver’s two children arrived in a limousine. I’m not sure I’d ever seen a limo before that event, so the thought of riding in such a big car was totally foreign to me. When I suggested to Mrs. Shriver’s personal assistant that her children needed some outdoor clothes instead of the proper prep school things they were wearing, he seemed shocked, then considered it. He went to his boss and she looked my way suspiciously. But her assistant eventually came to me with $200 cash and told me to go buy them something more appropriate. I’ll never forget the feel of that cash in my hand. At that time in my life, that was like giving me $2000 in pure gold.

Of course, I didn’t occur to me that they didn’t expect me to take the kids. After all, I’d spent years babysitting others’ children and taking care of my younger siblings, so I was used to being responsible for little ones. And I needed them to try on the clothes. I grabbed Maria, who was about twelve, and her younger brother, who was maybe eight, and we hopped into my $75 Beetle convertible with the broken top and bright plastic flower stickers covering the rips in the seats, and off we went to K-Mart. They loved my car! They’d never seen anything like it. It was the same with K-Mart. They ran up and down the aisles in wonder. It only took a few minutes to get shorts, tee-shirts, and tennis shoes, which they wore with glee. We were back at the track within twenty minutes. When I handed Mrs. Shriver $175 in change she was shocked. She said she hadn’t seen the limo leave and it was then that it became clear to me I didn’t know how things were done in the upper crust.

More and more over the years I’ve come to appreciate how she bravely spoke out about a topic many were embarrassed to acknowledge – the need for services for people with disabilities. I’ve come to understand that she did it out of love for her sister who, according to the recent biographies, she did not know the whereabouts of for many years. When she learned about Rosemary’s fate and that she was sequestered in an institution for the disabled, she visited her beloved sister on a regular basis. It was then that she put her family’s money, privilege, and power to good use to help others with disabilities.

As I said, Eunice Kennedy Shriver was one of the greatest women of the 20th century. We can only hope to have more like her in the 21st.